I Have No Idea What to Call This One

If you’ve come here looking to read about all the adventures I’ve been having now that I have a fancy new wheelchair I’m sorry to disappoint. Today is the first day I have been out of the house. But, I have a good reason.

We’ve torn up my closet/shower to update it and make everything more accessible. Because why not turn your world upside down while you’re getting used to a new piece of equipment. So there’s adventure here, it’s just still inside the walls of my comfort zone.

Below are some pictures of the destruction. When it’s all done it’s gonna be great. Which is why I am staying so zen about it. I’m zen. I am. Really… 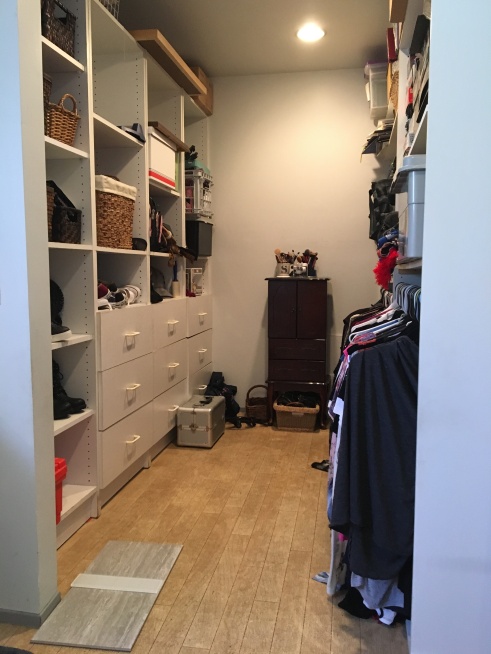 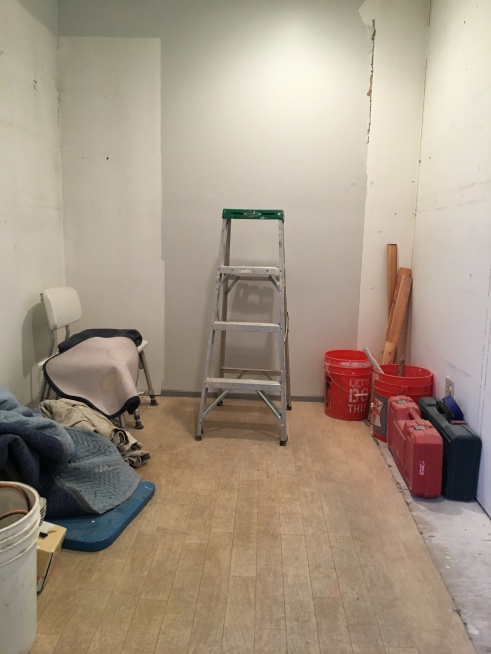 Closet will be completely rebuilt and there will be a door on it. I get to design it to my needs. That’s a bonus. 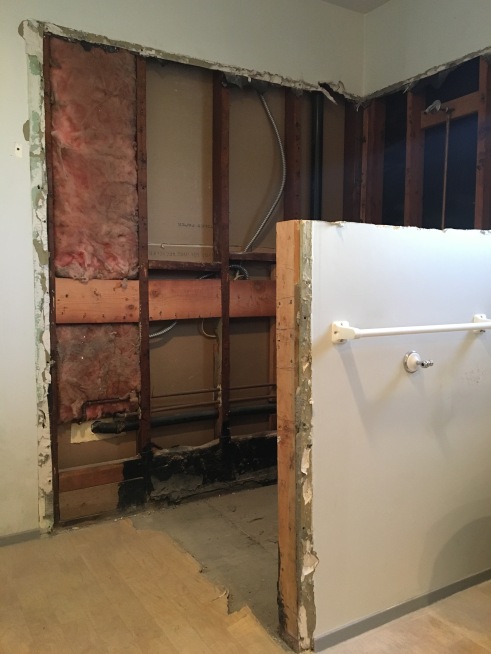 Shower will be set up better, with a flat surface for me to roll on and some better solutions as far as benches and shower heads. There will be glass where the part of the half wall has been removed. (Hard to see in the first image but there was a step up into the shower).

My big grand dream of having the entire bathroom reconfigured had to be lessened to keeping the layout the same. But it’s all win/win in the end. It means I won’t have to move out to allow them to cut into floors and pipes and all that stuff and I still get the makeup vanity I’ve been dreaming of, in my bedroom.

As I said before, today I went out of the house. Alone. The outing was a success. A quick trip to a mall close by, where I bought a bunch of things I didn’t need, and a few things I legitimately did. There was only one hiccup, and it came after I had zoomed around watching my money disappear as fast as my wheels turned. The key fob remote system that deploys my ramp decided to take a nap. So there I sat in the parking lot watching my transformer refuse to turn from car to robot. I suppose it isn’t a surprise that Max Argent is a moody as me. The good news is she gets over things as fast as I do too. Let’s just hope she doesn’t hold a grudge like I do or I’m f*cked.

Okay kids. Here I am with another update. And it’s not a good one. Well, it has its moments, they’re in there somewhere, I think.

Let’s talk about it. In February I discovered, researched and started the process of acquiring a new modified SUV on the market for disabled people. I went on a mission. Begged, borrowed, nearly stole but didn’t have to, and had one in my driveway by mid-June. I named her Max Argent. I immediately put a Kings decal on her. I personalized my license plate to further show my hockey team pride (a fun DMV story will appear at the end of this post). I put a Harley Quinn license plate frame on and a Transformers magnet on the cool sliding door to further indicate this car was and is super cool.

But. I couldn’t get into her on my own – she’s a big beast, and the cool light up, slide out ramp is just too steep. Back to research mode I went, where I discovered, researched and started the process of acquiring a new wheelchair and a set of power assist wheels. By mid July I had tested the wheels – they do indeed work where I need them to – got fitted for the new chair and was on my way to the freedom I thought Max would bring.

Side note: I had a car, it was old, and so am I, so the difficulty of getting in and out of it and my neurotic brain dreaming about being stuck on the side of the rode in a wheelchair wondering how a tow truck was going to get me and my wheelchair into its cab pushed me to get a new one. Once I took possession of Max I was no longer in possession of Neo, my Saturn Ion which did me good for 13 years but wasn’t going to last much longer.

Anyway. The beginning of August rolls around and I’m still not. Rolling around, that is. At least not in the new chair with the new wheels. A measuring misstep meant it was back to waiting. At which point things turned into a three-ring circus or one long episode of punked, or a very elaborate practical joke. I’m not even sure I know at this point.

Here’s what I’ve never known about ordering a wheelchair, because I’ve never been in a position to have one made specially for me. There are people who come in and talk to you about your needs, called OTRs – Occupational Therapist Registered. Mine was nice, seemed knowledgable, talked to me for over an hour about what I wanted and wrote everything down. She then proceeded to lose everything or forget everything or, possibly the best explanation, do a half-assed job because she was leaving the sales company. Never-the-less a chair was ordered and upon it being delivered to me we discovered it was too tall.

After several long conversations in which she argued with me, my mom, and her own wheelchair technician (doing whatever she could to not take responsibility for the error) the OTR called TiLite (the wheelchair manufacturer) and asked how low they could make the frame. Sixteen inches. Great, make me one that size, no problem, we’ll get right on that, Rose. The OTR and the tech left with the chair and the power wheels.

The next day I got a call from Academy Medical, the OTR’s former place of employment and the place that the sale of the wheelchair was coming from. A manager and another tech were dispatched to my house, where they remeasured and re-confirmed the new order was right. Three days later I was told the new chair in my actual size would be delivered from TiLite to Academy within two weeks. Two and a half weeks later I got a call from Academy.

Upon checking in with TiLite, the folks at Academy were surprised to find that the frame that had been scheduled to leave the TiLite facility on a Friday had not only not been shipped, but had an issue – this was now the following Tuesday. No one at TiLite had contacted Academy to discuss the issue. They waited for Academy to call them. Not kidding. Not even a little. The issue was the front wheels. If they made the frame sixteen inches those wheels would not clear the metal on the foot rest bars. But there was a fix, make the angle of the bars a bit more like a V. The current footrest was shaped like a U. When I got the call from Academy to check with me about the change I shouldn’t have been surprised. Yet, I was. We discussed the changes, I approved them, and that was that. Right?

Nope. Phone rings thirty minutes later. Can the manager and a whole other wheelchair technician come see me. Sure, why not. I don’t care if the entire staff at Academy Medical in Downey comes to my house, just get me a fucking wheelchair that works for me. Zen, breathe. Just doing their jobs. Measurements done, discussion had, everything great. New frame ordered.

By the way. All of this happened the week before Labor Day. So you can imagine how much work got done in the days ahead. So I wasn’t surprised that it was another week before I finally poked my nose in and asked for a status update when I hadn’t heard anything. Manufacturer says it’s shipped and should be at Academy “today or tomorrow.” That was yesterday. September 14. It is currently September 15. Still no chair, no word from Academy to confirm it has been delivered to them, nada, zip, zilch.

At this point I’m not even really sure I’m getting a new wheelchair. I think I’m being punked. As a person who believes in karma I can’t help but wonder what it is I did in my life that I’m being paid back for. Or what lesson I’m meant to learn from it. All I know is this is some high level bullshit. So the patience and the empathy I’ve had for anyone else’s problems, plights and drama is gone. Today, this week, maybe even for the whole month, try to look me in the eye and tell me about how rough your life is. I dare you. 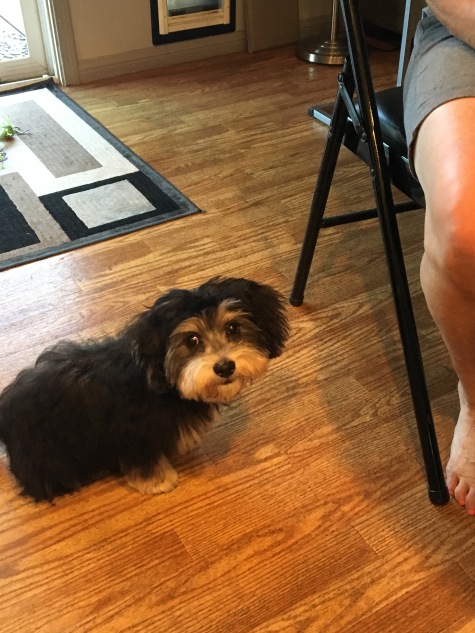 Sorry about that, here’s a puppy.

A DMV story because you knew there’d be one (first because I told you and second, of course there is, there always is). When I knew for sure I was getting the SUV I started the process of ordering a personalized plate. Got myself the new dark classic plates with my favorite team (LAK) and my favorite players (27,32). When I got the notice the new personalized plates were at my local DMV I should have been really excited. I wasn’t.

Problem #1 – I couldn’t go get them by myself because of that whole no new wheelchair thing I just told you all about. Problem #2 – we have a new puppy who has never been home alone. Mom and I decide it’s not a problem, he can be alone for a little while, he’s got to learn. If I make an appointment, thus ensuring we’ll be home quickly, and mom and I went and picked up the plates and all was well.

Just kidding. You knew that’s not where this story was going. We check in, get my number, wait for it to be called. We’re relieved when it comes up fairly quickly (for the DMV). I hand over my stuff and the agent goes to get the plates, shows them to me, I ooh and aah, and he goes about getting me my new tags and registration card. The system won’t print the card. The agent gets up and asks someone for help. Comes back, types on his keyboard. Nope. Leaves again, someone comes back with him, retypes my information. And…nope. He goes to talk to his manager and comes back to inform us we can either wait twenty more minutes or come back later, but twenty minutes was a guesstimate it could be longer, the manager is very busy. At this point it has been an hour since we stepped foot in the DMV.

I calmly ask him what the issue is because at this point all anyone is doing is arguing and I’m just sitting quietly trying not to punch people in the knees. I wish I was making this part up. The paperwork on my car and registration says Stacy Phay. The DMV system says Stacy R Phay. It won’t give me my new registration because of the R in their system (my middle initial, by the way) and it won’t let anyone in the office take it out. Only the main DMV office can fix this and only a manager can call them, but she’s busy as previously mentioned. After an hour and half we leave the DMV without my plates, frazzled about the state our new puppy is in, frazzled about the state my mom’s bedroom is in and curious about the state our government agencies are in.

Alas, this story has a happy ending. The puppy was fine, the room was only in slight disarray and my mom was able to go back and get the plates later in the day without any issue. 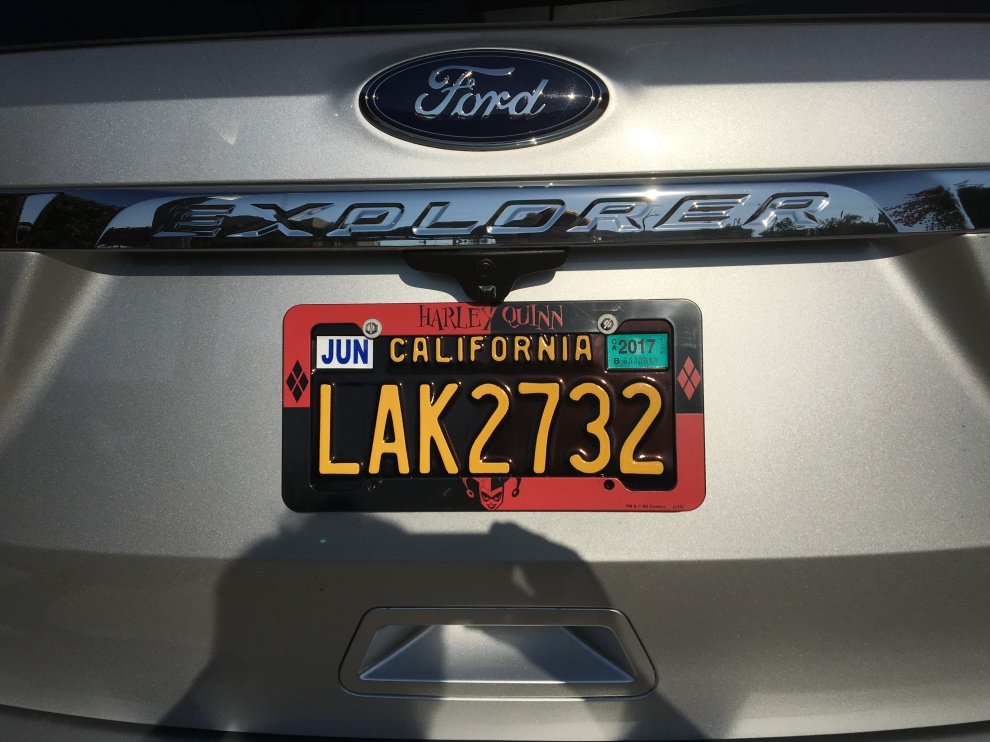 Max Argent is complete. And someday I’ll get to go places to show her off all by my onesies.